The art of cinematic storytelling

In todays article we’ll take a look on a basic and well-known editing technique. NEVERTHELESS, you’ll hardly find a better example of this technique! And just so you know, The Silence of the Lambs was among the nominees at Academy Awards in 1992 for best film editing. CUT!

Standard and probably the most used technique of shooting and editing a dialogue scene is to start with the master shot. Then, as we learn more about the characters, as new information is being revealed, we’ll use tighter and tighter framing (the following stills were taken from 1946 noir film The Big Sleep, in case you are wondering).

(As always, there are and will be exceptions. For example, Woody Allen avoids coverage completely in some of his movies and shoots the scenes only in master shots. The funny thing is that its out of laziness! 🙂 It helps him avoid the necessity of cutting and doing many more takes. (1))

Dialogue scene coverage in The Silence of the Lambs

(The following text was taken from filmsite.org) 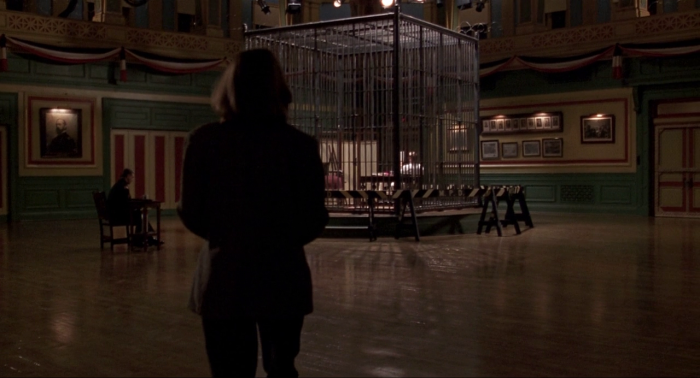 In the middle of the Historical Society Room on the fifth floor, a massive temporary iron cage had been erected, cordoned off by black and white striped police barricades. Inside the cage, Dr. Lecter sat at a table reading, his back to her. Without turning, he greeted her: “Good evening, Clarice.”

Both alternatingly traded information and confided in each other – learning vital secrets that each one coveted. The camera moved to closer angles on their faces as the scene progressed and the intimacy level intensified.

A domineering close-up filled the screen with Lecter’s forehead as the intimidating doctor compared everything to Clarice’s failed attempt to rescue a frantic, bleating and “screaming” lamb from the slaughter when she was a child to her present day motives regarding the rescue of another innocent victim.

The camera slowly progressed beyond and through the bars until it appeared that the menacing doctor had broken through the cell bars to psychologically assault the vulnerable Clarice. (2)

You can clearly see in this example how framing gets tighter and tighter as the scene progresses, as more information is revealed and as the level of intimacy increases. The best part is that the bars between Clarice and Dr. Lecter completely disappear during the close-ups (=maximum level of intimacy)!

Well, there is so much going on in this scene that I could rant for several hours about it, but I would never finish this article. So just very briefly, here are some additional ideas:

Each framing brings certain level of tension. The tension is low during the master shots, because you are basically free to look anywhere you want inside the frame. Opposite to this, the tension is at its maximum when we cut to close-up, because you have basically only one place to look at – the actor’s eyes.

If we were to draw a “tension graph” of this scene, we’d get a bell shaped curve (tension on Y axis and time on X axis). Needless to say, the best scenes (movies) employ something like sinusoidal curve, the tension goes up and down repeatedly.

For the master shot, wide-angle lens(=short focal length) was used. For tighter framing, lenses with longer focal lengths were used. The reason is twofold: